The Parish area is some 1,700 hectares with 3,878 adults on the electoral roll in 2011. The main centre of population is split into
two. 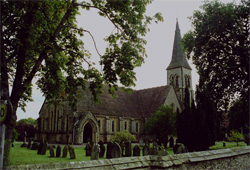 It is separated by Fidelity and the Westwood open space from the southern part of the village which is astride the B245 and virtually joined at the extreme south-east to Tonbridge whose centre is some 2½ miles away.

Notable residents include Dame Kelly Holmes, the double Olympic champion in 2004 and until his death in 2011 Sir Henry Cooper, the heavy weight boxer.

There is a Conservation Area which includes parts of Mount Pleasant, Church Road and Tonbridge Road between Mount Pleasant and the 2* listed church.  A map of the conservation area can be found in the maps section.

The largest employer is Fidelity International, with other employment being split across a range of smaller enterprises.  Many of the population commute, especially to London, from the railway station, which is the railhead for a wide area, using the services between Charing Cross/Cannon Street and Hastings/Margate.

You can use the link to plan your journey using the National Rail Enquiries follow the link www.nationalrail.co.uk/stations/hlb/details.html   There are bus services to Bromley, Leigh, Tonbridge, Tunbridge Wells and Underriver.  Timetables are available at bus stops or from the Library.  There is also a rush hour shuttle between the Railway Station and the Village.

The population is served from a comparatively new Medical Centre which is part of the West Kent Primary Care Trust.  There is a new Tunbridge Wells Hospital, located at Pembury and serviced by a bus service from Tonbridge.  There are community hospitals in Tonbridge and Sevenoaks.  Accident and Emergency is provided at Tunbridge Wells Hospital with a Minor Injuries Unit at Sevenoaks.  The village also houses the Raphael Medical Centre.

There are two state primary schools, Hildenborough Church of England Primary School, established in 1847 and recently extended, the other being Stocks Green Primary School built in the late 1960s.  There are two private schools, Fosse Bank for primary aged children and Sackville School for secondary aged pupils.   State secondary school provision is primarily in Tonbridge and Tunbridge Wells.

The current Village Hall was built in 1970 but has since been updated.  It is on the same site as the original ‘Iron Room’ which was erected in 1902.  It is the centre for a range of leisure activities.  If you wish to book the Village Hall please phone 01732 833092

There is a sub Post office at 185 Tonbridge Road.

For the Latest News from the Parish Council see Centre Piece and Latest News.

Parish Council Meeting will be held on Wednesday 14th September, 2022 at 7:30 PM

Meetings are now being held face-to-face. Please see the agenda for joining details.

This site uses cookies. By continuing to browse the site, you are agreeing to our use of cookies.

We may request cookies to be set on your device. We use cookies to let us know when you visit our websites, how you interact with us, to enrich your user experience, and to customize your relationship with our website.

Click on the different category headings to find out more. You can also change some of your preferences. Note that blocking some types of cookies may impact your experience on our websites and the services we are able to offer.

These cookies are strictly necessary to provide you with services available through our website and to use some of its features.

Because these cookies are strictly necessary to deliver the website, you cannot refuse them without impacting how our site functions. You can block or delete them by changing your browser settings and force blocking all cookies on this website.

These cookies collect information that is used either in aggregate form to help us understand how our website is being used or how effective our marketing campaigns are, or to help us customize our website and application for you in order to enhance your experience.

If you do not want that we track your visist to our site you can disable tracking in your browser here:

We also use different external services like Google Webfonts, Google Maps and external Video providers. Since these providers may collect personal data like your IP address we allow you to block them here. Please be aware that this might heavily reduce the functionality and appearance of our site. Changes will take effect once you reload the page.